A downloadable game for Windows, macOS, and Linux

Your last mission: a catastrophic failure.

Your second pistol: missing in action.

In your absence, the righteous corridors of this sanctum have been tainted.

It’s time for another crusade.

Shoot demons, dodge bullets in slow-mo, fight some intense boss battles. What else could you ask for?

Bullet Sanctum should take about 30-45 minutes for an initial playthrough. (We've speedrun it in less than 10- send your best times if you want to take a shot at it!) Not to spoil too much, but there's one mini-boss, one wave-based mob arena battle, one final boss, and a big boi named Shelldon  to defeat :)

Bullet Sanctum is a game about banishing demons with unfettered virtue - that is, if virtue spat lead and was gunpowder-scented. Following the events of Bullet Heaven (an entry for ScoreSpace Jam 5), you are once again a Crusader - a disgraced marksman of divine faith, seeking atonement after failing to repel the incursion of Hell's forces. Armed with sacred ordnance and zealotry brighter than the stars, it is your duty to fire into the fray once more, and reclaim the holy sanctum from sin and corruption.

Inspired by titles like DOOM and Bayonetta, Bullet Sanctum’s gameplay is about shooting demons dead with ferocity and grace. The Crusader wields multiple guns with unique strengths and weaknesses, serving different purposes in both combat and level navigation. Making quick decisions while staying on the offensive is critical to surviving against various types of hellspawn.

Skillful gunplay is incentivized by the Bounty mechanic, an adaptation of arcade-style scoring that converts combat performance into currency for upgrades and character progression. Any Bounty that isn't cached at Checkpoints is dropped on death, but the Crusader's Bounty multiplier increases the longer he presses on without banking his gains.

Bullet Sanctum was developed by Trisagion Games, in 31 days for the Metroidvania Month 8 jam.

Special thanks to House of SWARM for the SWARM Sounds - Vol. 3 pack, which we sampled in our production of background music. You can access them here: https://swarm.lnk.to/soundsv3 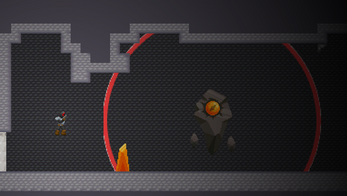 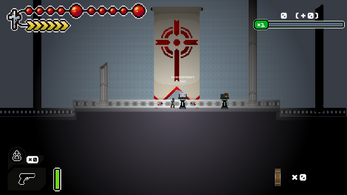 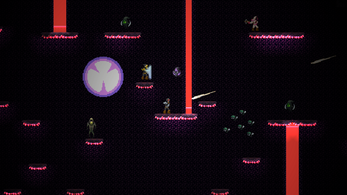 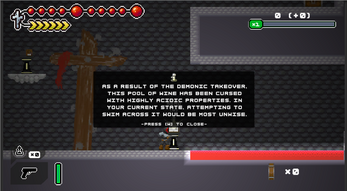